Gday Ryan
You have done a fantastic job with that, thru each stage.
A couple of easy questions .. because I don’t know

When mounting the drawer set, did you bolt all the way thru? Or is there cam locks or similar on the triton?
With the canopy , I assume you do not have a sliding front window, and it looks like both side are lift up.
In retrospect, would you of had sliding somewhere? Mainly if the dog was ever in the rear?
Cheers

Thanks mate, it has been a long project that as of today is finally complete.... Whatever that means with a 4x4

Yep. Straight through the tub! 3 bolts at the front, and 2 at the rear, all M12 with 50x50mm square washers from bunnings. It is a little more destructive than the cam locks or eye bolt style mechanisms,although it is definitely not going anywhere, but it can be removed if I really need to. The side shelf is mounted to the draw with a series of 90 brackets and reinforcements.

Absolutely no chance of going a sliding window. Personally I think they are a terrible waste of access space. This may be a little different because my dog always rides in the car and also cannot access the windows cos she's too short haha. But I do think they are useless that they only allow 1/3 of the aperture to be accessed particularly when the dog isn't in the car all the time. It's a big no from me on sliding windows.
The ARB canopy is great, but they do take a bit of time to seal up properly. They are pretty well known for leaking!

Let me know if you have any more questions

This was a matter of necessity and insurance. I had been up the high country this winter and got my car so stuck that I was totally reliant on others to pull me out. Never again.. The following Monday I went to the 4wd shed and purchased a Carbon winch. They are Australian designed, have fantastic support, and from all reports are a great value winch for their high performance. This was 5 months ago before I committed to putting it in.

So with another day and a half in the driveway we have a working winch. For all those who have a summit bar, despite what ARB tell you, you do not have to remove it to fit the winch. You need to remove all of the mounting bolts, apart from 2, and rock it back. But the bar does not need to come off. I used a trolley jack and some ladder straps to hoist it into place. I used my failed fuel filter bracket to mount the isolator, which I mounted the breather too also. Pretty easy install, but as always I was overly pedantic and ensured I did everything properly. 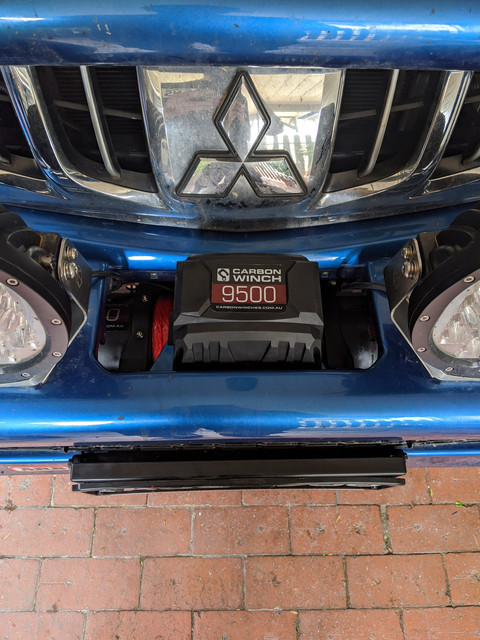 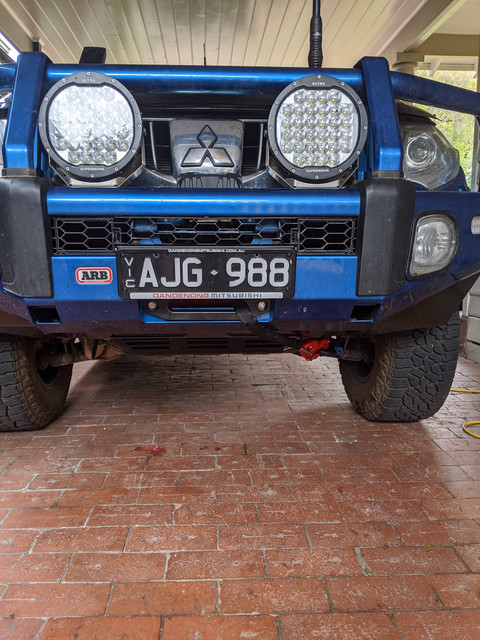 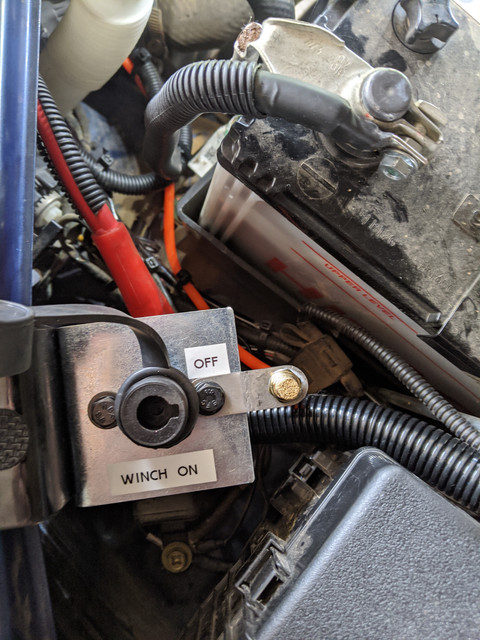 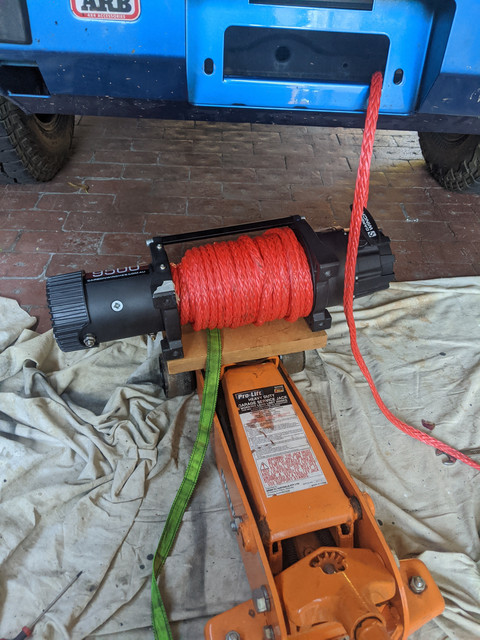 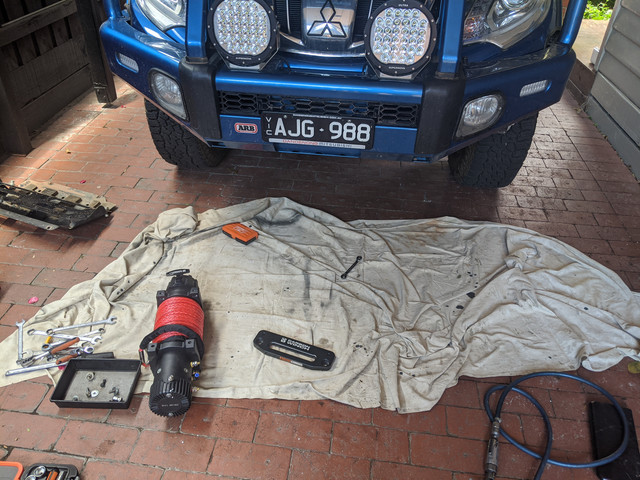 Thanks for the feedback, appreciated.
I am going with a flexiglass canopy, flexiedge, so hopefully this be ok

I will go with the liftup, sides.
After again looking at this, you are correct with the wasted access space.
Its funny.... to me anyway, I was looking at putting in a single drawer, about 6 months ago.
Didn't, only because I was unsure the practicality , particularly with the fridge and a few other items.
And I also had some riding gear to squash in.
After looking at your setup, I will now look for a single to slot in there.
cheers

Awesome mate! One of my mates with an MQ had a flexi glass and it sealed awesome. Good option.

Yep, it's perfect with everything over to the passenger side. I can even fit a bike in on the driver side without too much hassle. I'd recommend the supa centre single drawer. It needs small amount of rework, but for $200 or whatever they are now you really cannot fault them. And the wing kit bolts directly to them.

Good luck with your set up, message me if you have any troubles or queries. 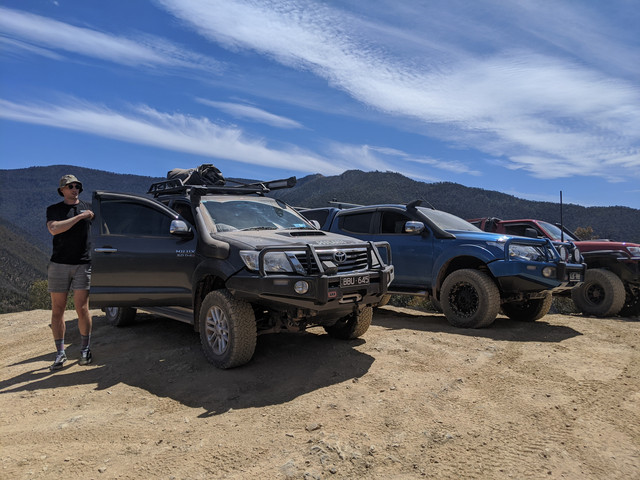 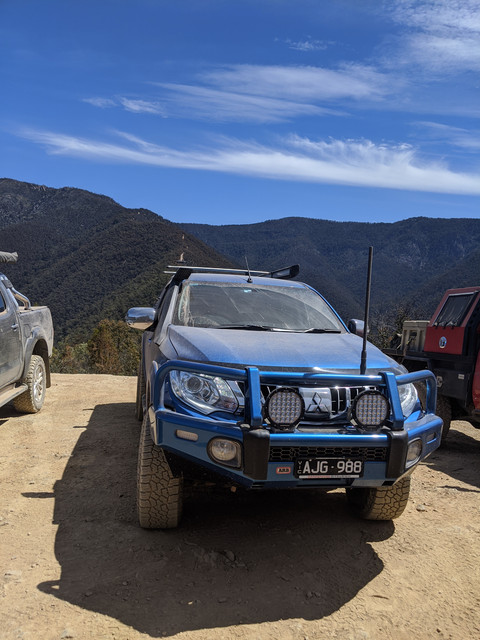 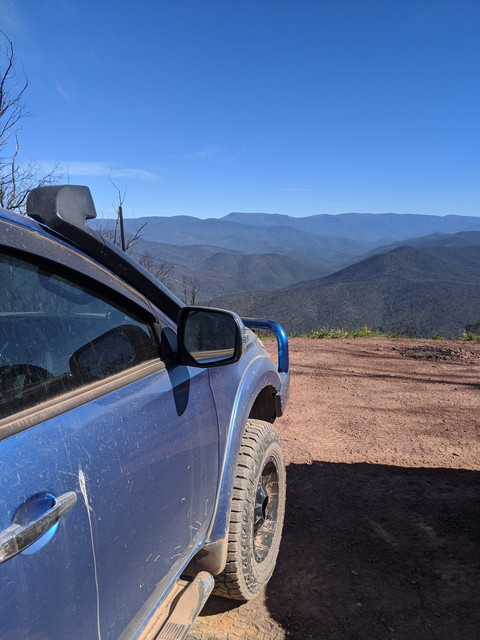 Few photos from the high country last weekend. Went from Glenmaggie to Dargo including down Billy Goats Bluff track. The combination of new tyres and suspension was chalk and cheese from the last high country expedition.

i have posted on the forum general, but are there any existing anchor points within the tub , to mount the drawers?
i am assuming no.

There are six tie down points in the tub, all about 2/3rds of the way up the walls. 1 in each corner and 1 each just beyond the wheel arches. None of which would really work too well for mounting drawers. They're too high up.

This is how i mounted my false floor for fridge slide and single drifta draw etc ...could use same theory to side of drawers?

Big fan of the build!
What is your Centre hub to guard measurement with the 2" bilstein lift?
My "2inch" lift looks nowhere near yours, my front end measures about 540/545mm.

I just wandered out and measured (which I had never done before or after installing) and its about 565mm on the front and about 575mm at the rear. It seems to have dropped a little in the front since the winch went in but rides perfectly. Very happy with the suspension.

awesome work, mate love the build the thread braver then me I just palm if off to a shop to do

though have question on the supernova driving lights what are your thoughts on the brightness and range on these lights always run HID's and they awesome on highways but rather lacking in the heavy timbered roads.

Thanks mate. Does everything it needs to really well and I'm very happy with how it has turned out.

The lights are really good, and very comparable to other mid to high end LED lights on the market. The only problem I find is the colour of the light is quite taxing to look into for long periods. They are extremely bright, have good spread, and pretty good throw down the road. At this time the Stedi type X are around $480. I'd get those as opposed to HID I think.

Good luck with the MR build! Keen to see some updates

Got sick of the vortex bars I had on the canopy. Couldn't put anything up there because they were too far apart. They were good for holding the awning, my shovel holder, and my bike mount, and that was it. The space between them was too far for a camp chair, esky, gazebo, or anything over than a plank of wood. Supercheap had a big sale the other week and I actually bought a Rola Titan tray to mount onto the bars. It was reduced by $300 so bought it with the intention to think about it over the weekend with it mounting on top of the bars. Got to Sunday afternoon and I realised I wasn't happy with compromising to save a few dollars. Decided I'd wait until Autobarn had their big sale and take advantage of 30% Rhino Rack and took the Rola Tray back to Supercheap. As luck would have it, the new Rhino Rack Pioneer has been released in the last few months and most roof rack shops want to get rid of their old stock. So, the next day I got a notification from Roof Racks Galore in QLD that the Pioneer Platform was more than 30% off! By Wednesday there was a TNT truck delivering my new roof rack to my house

I am currently working at home, so the moment it struck 4 30 I was in the driveway fitting my new accessory. The tray is a huge improvement from the bars. So much versatility, and useful space, and it bolted directly onto the ARB mounts on my canopy. I bought the Pioneer Platform SX which comes with Vortex Bars cut to fit inside the sides of the platform. It was basically a swap of silver to black bars, 10x t-bolts slid down the channels, and on she goes.

I have modified my awning bracket to suit, got a new bike carrier, some eye bolts for tie down points, and retained my shovel holder. Plan is to run a 40" Stedi light bar on Stedi's specific Pioneer brackets, and put a small flexible solar panel on to top the battery up when parked. Very happy with it, but unfortunately it might a little while before we all get to go out camping and exploring again! 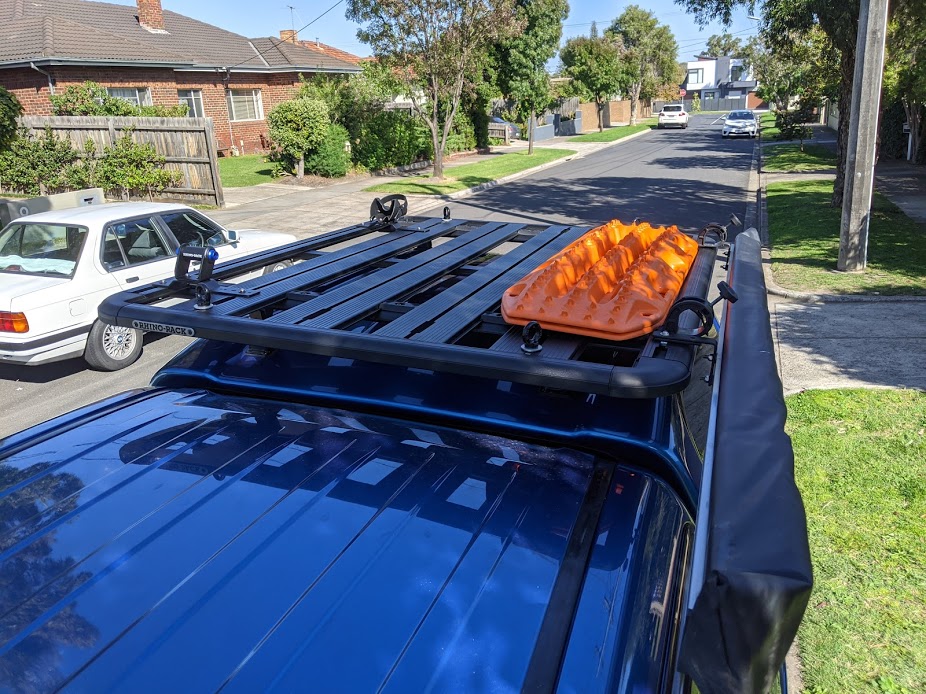 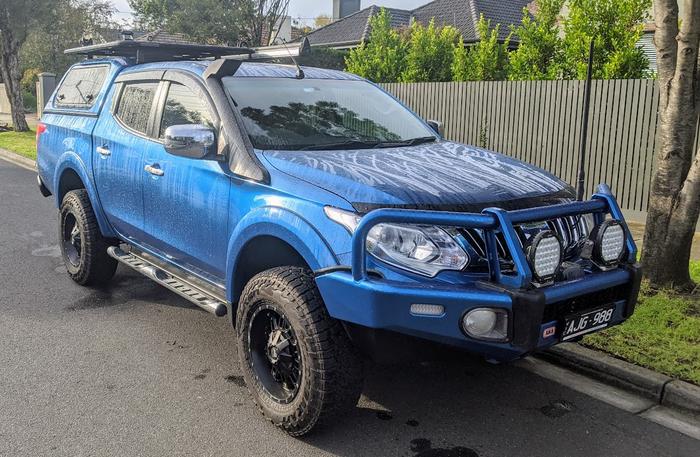 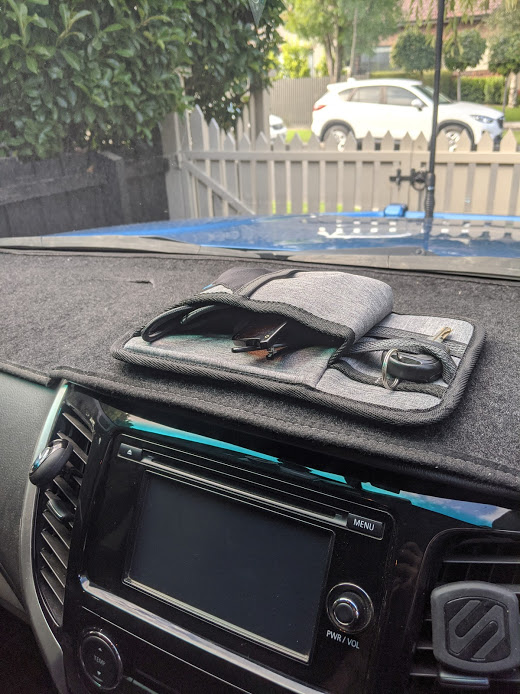 Running a Navigator Dash organiser. $30!! much cheaper than MSA or Grabmegear. Possibly one of the cheapest items at ARB 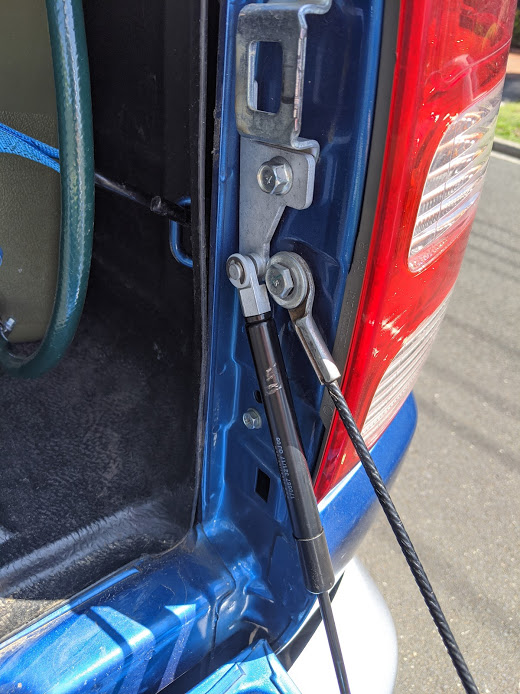 Also fitted the drivetech tailgate strut. This is a great product with some nice Australian designed and made brackets but........ it doesn't fit properly. It fouls on the catch for the tail gate rope. I have contacted drivetech, hopefully they'll help me out, but it is a little annoying that it fouls being not exactly a cheap kit.

Anyway, it stops my tailgate slamming down which is awesome. Hopefully they improve the design.